A Nigerian woman has taken to social media to share the interesting story of how her boyfriend inadvertently helped her to meet the man she married. 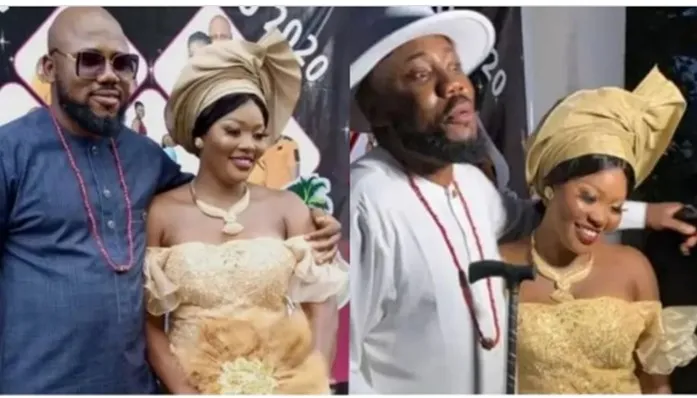 The lady identified as Millicent Nwanyimanaria revealed that in 2016, she accompanied her boyfriend to a hotel where he wanted to collect some documents.

He asked her to wait by the pool side and just as she was chilling, she saw a handsome guy who caught her attention and she instantly fell in love.

The young woman said she prayed for him to approach her and when he did, the guy asked why she was sitting all alone.

Millicent lied that she was waiting for her cousin who was inside the hotel, so her crush joined her for a chat.

They spoke at length and she impatiently waited for him to collect her number before her man comes out, when he eventually asked for her phone number, she gave it without delay.

Luckily for her, the man who eventually becae her husband left before her boyfriend came back out.

She talked about him to her friends and waited for a call but he didnât contact her until about a month later.

He apologised for the long radio silence and revealed that he traveled, shortly after that theuir relationship started and they got married in November 2020.

Read her write-up below:

âHow I met my husband challenge

It was in year 2016, when I accompany my then boyfriend to a hotel to get some documents from someone. He asked me to sit in their pool bar and wait for him. As was waiting for him with my cold malt, na so this handsome fresh man came out from the reception, immediately I saw him, I fell in love with him. It was love at first sight ooo

Baba approached me and sat opposite me, he greeted me first and I responded, he was like fine girl, âwhat are you doing here all alone, are you waiting for someoneâ? I lied to him him that i was waiting for my cousin that he went in to see someone. Omo baba relaxed and started a conversation, he told me where he came from and i was so happy when i heard Nnewi because I have always wanted to meet someone from that town.

In my mind I was like, collect my number na before this guy will come out abeg, after what seems like ages, he finally asked for my number and i gave him. Immediately after we exchanged number, my then boyfriend came out and we left. This man didnât call oo, my friends were just laughing at me, that my premium Nnewi man didnât save my number, thatâs why he hasnât called. After about a month this man called and he apologized for not calling since then because he travelled.

My sisters, relationship started from there o and the rest became a history. We got married in November 2020 and God has blessed us with a beautiful baby girl. You guys should not judge me oo, am not always like this, donât know what came over me that, maybe God want to use my boyfriend to show me my husband. Am happy lied oo because he is my perfect man.â