A young lady identified as Regina Legum, has said that she got fired by her boss because she participated in a solidarity rally for presidential candidate of the Labour Party. 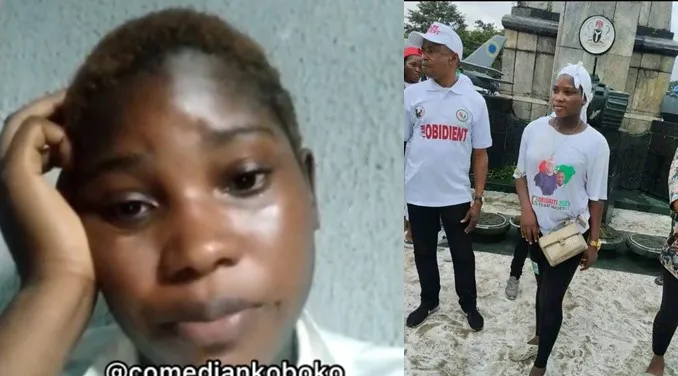 She revealed that she worked at a hotel as a reception but on the day she was off, she joined the two million-man march that held in Port Harcourt, Rivers state.

In a video making the rounds online, she narrated how her boss called her when she went to work the next day and told her to go and meet Obi to give her work.

Regina said that her boss brother also asked her how much she was paid to participate in the rally, but she informed him that she did not collect any money.

According to the lady, she pleaded with her boss not to lay her off but her pleas fell on deaf ears as she was laid off the following day.

She said that she gained admission into school this year and the receptionist job is what she wanted to use to sustain herself while studying.

Comedian, Koboko shared a video of the moment she was at the two-million-man march in Port Harcourt over the weekend.

He wrote; âShe got sacked by her boss for supporting Peter obi. I pray help comes her way.â

Watch her speak below: